Welcome
The LCA is an all volunteer organization dedicated to serving the Latino community of Tompkins County by providing a platform for its social, cultural, education and civic expression.
Our Mission:
To foster a united Latino community, strengthen Latino identity, and promote solidarity,
​cultural pride and civic engagement.
The LCA board meets regularly the second Tuesday of every month, 5:30 p.m.  - 7 p.m.
February 9, 2021 05:30 PM
Please email us at lcaoftompkinscounty@gmail.com for the Zoom link.
Por favor escribenos a lcaoftompkinscounty@gmail.com para que te mandemos el enlace de Zoom. 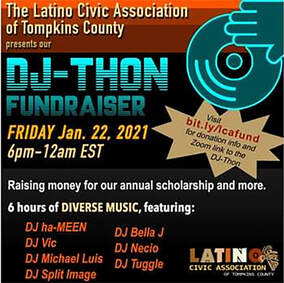 2020 Latinx Heritage Month Celebrations
Click on the images to go to the event, or visit our FB page

This Month's Page in the CNY Latino


Webpage Manager
Carlos Hernandez Rivera
Our Story
The roots of the Latino Civic Association of Tompkins County date back to 1971, when Héctor and Josie Vélez arrived in Ithaca, where they still live and Héctor still teaches at Cornell University. That first winter they hosted a Christmas party at their small duplex in Crescent Place to offer an opportunity for the then small Latino community to socialize with each other. Their “fiestas” became a popular annual event, and attendance grew to the point that they had to be hosted in larger venues, ranging from the Knights of Columbus hall to several ballrooms in hotels, Cornell University, or Ithaca College.

Two decades later, in 1994, a group of local Latino residents had the idea to formalize an association. This group included Héctor and Josie, Leonardo and Cecilia Vargas, Guillermo and Margarita Santisteban, Miguelina Tabar, Eric Rosario and Vilma Santiago-Irizarry. Shortly thereafter, a Cornell student from Puerto Rico, Anna Isabel DiDónno, proposed this developing group as a project for her studies in the Hispanic-American Studies Program at Cornell, in which Héctor Vélez was an active participant and one of its founders.
Anna Isabel’s goal was for the future association “…to provide a forum where all of the facets of the Hispanic Community of Tompkins County are welcome [and] can confidently share their voice with one another.”  She applied for and received a grant from Cornell University’s “Student Grants Committee”, and arranged for free meeting space at GIAC.
After a few preliminary meetings, the community was invited to participate in a public meeting at GIAC on November 20, 1994. Thirty-four people attended, and Leonardo Vargas was nominated and approved as “facilitator” due to his relationships with permanent resident Latinos of Ithaca, Cornell University and Ithaca College.
At a follow-up meeting on Sunday, December 4, 1994, the LCA’s first “Executive Body” was elected, consisting of  Twelve days later (Sunday, December 16, 1994), the first LCA-sponsored holiday gathering was held at Ithaca College’s Phillips Hall, Emerson Suite, with 152 people in attendance.
© 2016 Latino Civic Association of Tompkins County | Ithaca, NY | Last updated: November 2020
​